Frankie is a 3 year old miniature schnauzer who was born on the 6th of August 2015.She is a pure bred black schnauzer with hints of grey coming through. Her ‘gotcha day’ is the 1st of October 2015. Frankie’s ‘doggy’ parents were pure bred schnauzers too. Her mum was black, and her dad was salt and pepper. Frankie is a 6th generation schnauzer according to her KC assured breeder.

Some of Frankie’s favourite things are toys, food and walks on the beach (as seen in the picture below!).

I have trained Frankie from a very young age and I have done all the dog training available in Cardiff. I have taken Frankie to many ‘fun dog shows’ and have taken part in the ring craft activities. Frankie won best in show after I won best junior handler at Fonmon fun dog show. She has also won best in show at our local dog show to raise money for our local community, but not to mention we were the only dog and handler that showed up! Frankie also came second at a Funday to raise money for our local Dogs Trust. When Frankie was younger I used to want to show Frankie at Crufts and different dog shows but then I realised the terrible things the Kennel  Club were doing in terms of Puppy farming. Every year my family and I along with my friend Olivia travel up to Crufts in the NEC building in Birmingham. We don’t go to support Crufts as such, but we go to buy toys, treats and bones for Frankie that you cannot buy elsewhere. Crufts isn’t all bad.

I have worked very hard with Frankie over the years to bring her up to the best of her ability, she now knows 26 commands varying from sit, to crawl, to jump, to dance etc.
Frankie is very fun loving and even taught me how to wrestle with her because she loves it so much!

Frankie is also very friendly especially around young children and the elderly who she seems to go up to and be very calm and friendly around. She doesn’t care if toddlers pull her tail or her ears or her hair, we just think that she likes the attention she gets and likes to see how she lights up their faces.

In general Frankie is a very healthy dog (apart from the time she ate chocolate and had to go to the vets to get her stomach pumped!)

Frankie and I have a very strong bond and relationship, she follows me everywhere, if I run she will run after me and will track me if we play hide and seek!

Frankie is a stroppy schnauzer who always wants to be carried on the ‘boring parts’ of walks! She strops when she gets her collar and harness on, she strops if it rains, she strops on the way home from a walk and she strops if our other schnauzer Penny gets carried! 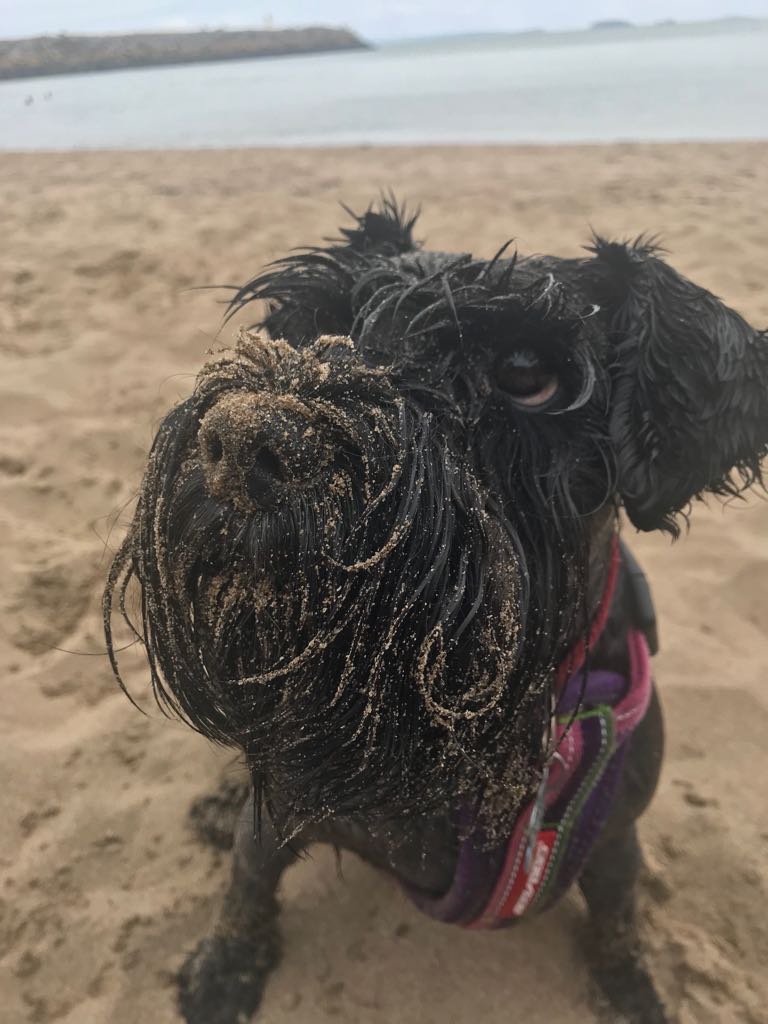