What is Lucy’s Law?
Lucy’s law is a law that is now in action in England. It was created because Lisa Garner adopted a cavalier king Charles spaniel from a puppy farm, she inspired the law to ban all 3rd party puppy or kitten sales, which includes: pet shops, online dealers and puppy farms. Lucy, the dog who inspired the law, made a difference as she had fused hips and a curved spine from being caged. She was also malnourished, had epilepsy, bald patches and “her skin smelt like burning flesh from the ammonia in urine.” 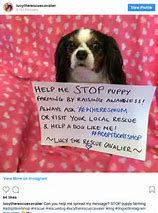 Environment Secretary Michael Gove said “A ban on third party sales will ensure the nation’s much-loved pets get the right start in life. I pay tribute to the Lucy’s Law campaign, spearheaded by Pupaid, Care And Respect Includes All Dogs (CARIAD), and Canine Action UK , who have fought tirelessly for this step. It comes after the prominent Lucy’s Law campaign to end the scandal of animals being bred in cruel conditions and transported long distances to be sold. People who have a complete disregard for pet welfare will no longer be able to profit from this miserable trade.”

This also addresses puppy smuggling which is also a major problem. read my blog post about it HERE
However, I believe that this isn’t the only step that needs to be taken. Puppy farms are still legal in Wales, Scotland and Ireland. When talking to some owners of Puppy farm dogs, most seem to say that their dog was saved from a puppy farm in Ireland or west wales or rural Scotland. Very rarely do I hear of puppy farm dogs from England.

I also think that the puppy farmers will find a way around this as they can be very sneaky, the government can barely combat financial fraud in my eyes let alone Puppy Farming. I believe that the farmers will go more rural and hide from the police and still be breeding dogs, or take the dogs over seas and illegally import them which is still happening.

If this law does succeed , which I hope it does, the general public need to help as well. They need to become aware of puppy farms and help combat them too. They need to know how to look out for suspicious dealers and puppy farms and what sort of questions to ask.
But this is amazing news for the puppy farming community who is ecstatic that their profile is rising and more people are becoming aware. This will certainly save a lot of dogs lives even if there is more that can be done. This law will stop some puppy farmers (who aren’t quite as smart!) who just wont think of a way around it!
Frankie and Penny love you, go rescue a puppy farm dog.