Her first problem was that she was disoriented and kept walking into trees and bushes. It took about 5 walks before she learned how to go around them and stick to the path.

Her second problem was that Penny got scared of roads and cars. For about 2 months she feared going near to roads so had to be carried any time we were anywhere near a road. After a while and a lot of treats she became confident but is still scared of buses and lorries driving past. 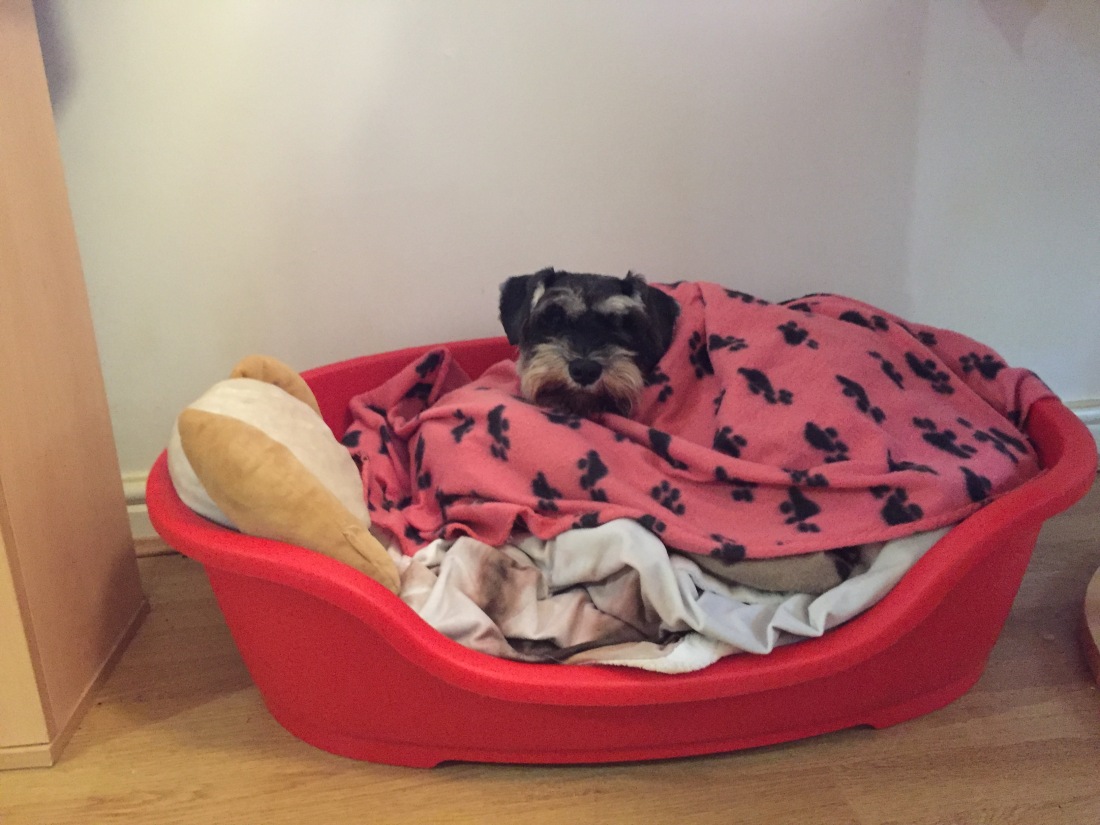 Her third problem is that she chews leads if it is not behind her. She still hasn’t overcome this.

Her fourth problem was that she could not go up or down stairs. It took 2 days of non-stop putting treats on every stair before she was able to slowly go up and down. She can now sprint up and down them.

Her fifth problem was that she couldn’t run. We took her for long walks daily and after a month or 2 she built up strength in her back legs so that she could run faster.

Her sixth problem was that she couldn’t chew hard things such as bones, dog biscuits, raw meats and dry dog food. It took her 2 and a half months for her teeth to heal a little and her teeth and jaw to strengthen enough to eat these foods.

Her seventh problem was that she could not walk on a lead as she was too scared of the lead. Luckily, we had a 100m long lead that she used as she could not feel it. We then shortened it until it was the size of a flat lead and she had to pull on it. This only took her about 2weeks for her to overcome.

Her eighth problem was that she couldn’t grasp what an owner was and just followed everyone she thought had food. She still hasn’t overcome this but is getting better.

We had a lovely day at Merthyr Mawr today! We were going to go to Dunraven Bay but it was too busy! ❤️
We had a lovely time last weekend with the beach to ourselves ❤️
We are loving @crufts! We love #Maisy!!!!! ❤️❤️❤️
We had a lovely weekend and a beautiful day at the beach today with @bellamabelschnauzer and loads of others! It was great fun! Thank you very much to Bella and Mabels mum who took this amazing picture and so many more ❤️
Hello everyone! If anyone is around Barry on Sunday, we are going for a Schnauzer walk with @bellamabelschnauzer and lots of other schnauzers! Join us 10:30am Outside Marcos Cafe if you are around! 🧡
**FOR APPLE (IOS) DEVICES** Change your Amazon app to Amazon smile. You have to delete original app and then search amazon smile from safari, log in as normal and set your Charity to Schnauzerfest. Then arrow up button at bottom of screen saves icon to your home screen as a link like the orange one. It’s much easier than using the website! Amazon will gift us 0.5% of your NET purchase price to no extra cost to you! This is the charity that saves Penny so this is a message from her 🧡
%d bloggers like this: