Penny is a 6 year-old puppy farm rescue dog. She is a salt and pepper Miniature Schnauzer. She was rescued by Many Tears  from a puppy farm in Wales. We do not know when she was rescued. Her ‘gotcha day’ is the 7th of July 2018 but her birthday on her registration form is 3rd of July which is the same as mine! Penny was signed over to Diana Brimblecombe Animal Rescue Centre (DBARC) by Many Tears. At DBARC Penny was diagnosed with a minor heart murmur which she went for a scan for at Lumbry Park Veterinary Specialists. The murmur was diagnosed as very minor so did not need a further scan or treatment. She was also microchipped and vaccinated. This was all funded by Schnauzerfest which I urge everyone to support so that more lives like Penny’s can be saved. It is estimated that Penny had anywhere from 3-8 litters in her time in the puppy farm.

Frankie is really enjoying teaching Penny how to be a dog. One evening Penny went to grab some food off my mum’s plate and Frankie told her off!
We don’t know Penny’s full personality yet, but we have seen little glimpses of her being very friendly to people and other animals. She seems to be quite a goofy dog as well as she likes to play with my hand by spinning it around in circles with her muzzle. She also does a lot of play bows at very random things. She is also greedy, but she can’t really control that if she was starved in a puppy farm. She is also quite jumpy around sudden movements and noises. 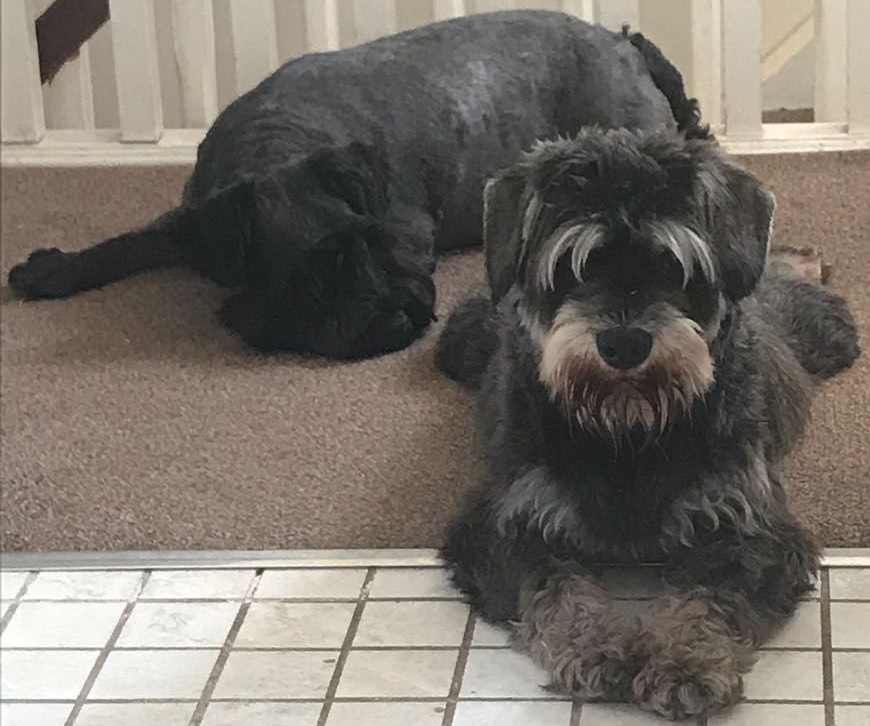 Penny and I already have quite a strong bond as she also follows me around just like Frankie and she also will chase me if I run!

Penny seems to LOVE food, treats and bones. But now she is seeming to become a bit choosy and is developing favourites and will just stand there if she wants something else. Penny loves having freedom when she goes on walks and has already started going off the lead. She also seems to love going in the water and drinks lots of water which surprised us as it took quite a while for Frankie to enjoy the water. We don’t think Penny was given much water in the puppy farm as she has this obsession.

Penny’s behaviour is a lot different to Frankie’s as she will bark at the slightest movement or sound. Penny also jumps up and down when she barks which Frankie doesn’t do. Penny will also do a little dance when she wants a treat and stomps around! Penny has also started howling for fun such as when I come home after going out she will come to the door and do a ‘woohoo’ sound at the same time as Frankie. As I’m writing this Frankie just wandered in with Penny following her which I think is Penny learning what to do from Frankie.